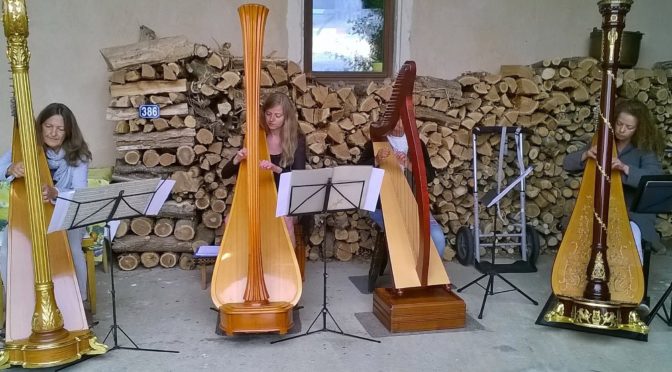 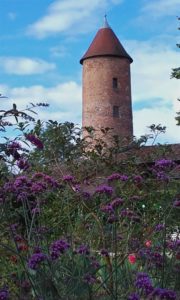 walked into an impressionist painting. The house’s tower completed this image. We were warmly welcomed by Rachel Ann, Maurice and Molly (the dog that made us decide to choose an Irish terrier for ourselves) and met the other two participants : Carla and Debby.

Although I have been singing for almost ten years, it was during this week that I really discovered my voice. I learned more here than in all the singing lessons I’d had before. The triangle of vowels, new breathing techniques and learning to sing softly all contributed to this. But most important was the positivity and openness of Rachel Ann. She gives each participant the right suggestions and if something  doesn’t work then she searches for another way of explaining.

Listening to the others’  lessons formed a bond and gave us new information. The final concert on Saturday evening  was an excellent end of the course. The hard work was rewarded with much applause and a proud smile from Rachel Ann.

I left for home with the feeling that I had experienced something very special. I had discovered a new aspect of my voice, I had met some really nice people and I had eaten very well (merci Maurice !)

“After spending a wonderful ‘ Tour de France ‘ for three weeks during which we visited favourite places, cathedrals, restaurants, and after meeting friends from The Netherlands in Meursault and Beaune, I spent a week with Rachel Ann Morgan and two harpists for a course on harp and voice.

Being a singer more than a harpist, I found it quite challenging to participate in this course. But then again, I tried to rely on my musicality, and the fact that years ago, I did a summer course harp and voice in Edinburgh. And so, after settling down in my room, I . started to create an accompaniment for a French song, by one of my favourite French vocalists, Francis Cabrel, to be performed by myself  with the Celtic harp and with Rachel Ann accompanying me on the Erard! I worked on this song for a couple of days, just in time for the concert at the end of the course. Apart from that, I sang some melodies composed by French composers Satie and Faure. And I had the luxury of two harpists accompanying me in each song. Cool or what!

Rachel Ann provided us with breathing techniques and by using the triangle of vowels I could work on correct French pronunciation.

As for the location where the course is held, I must say, it is a real pleasure to be there. The house is lovely. Not to mention the music room! And so was my (private) room. I really felt at home.

As a photography student (second year Fotovakschool, The Netherlands) I am very much attracted by everything I see, such as the lake in front of the house and the (rose) garden at the back. Despite the fact that music was my main focus this week, I had a few inspirational photographic moments.

Thank you, Rachel Ann, thank you for providing each of us with the tools we (individually) needed (and will need in the future). And Lidewei and Carla, it was lovely to meet you and your husbands and work with you. Together with Rachel Ann, we did a fine job of the ensemble pieces.

Speaking of a healthy mind in a healthy body, I think we all agree on Maurice’s culinary skills. He took such good care of us the whole time, with all the delicious snacks and dishes during our moments in the conservatory as well as in the garden. Merci beaucoup, Maurice!

And then there was a concert at the end of the week, during which the result of a week’s hard work is shown to the audience. Not to mention the after party with wine and delicious snacks.

Merci beaucoup, Rachel Ann and Maurice. It was a real treat!”